Free to be active: Take back our streets! 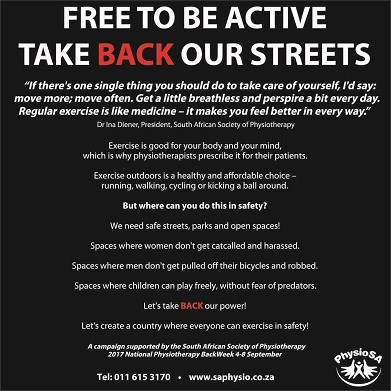 A woman out walking the dogs in Zoo Lake, Joburg’s iconic park; a woman getting some exercise, packing in some of the many physical and mental benefits of bodily activity… and suddenly she is overwhelmed, dragged into the bushes, brutally raped.

Terry Oakley-Smith’s brave account of what happened to her in 2015 aired in August on eNCA. It must have sent a chill through the hearts of every active woman who watched it (and not a few men, too); anyone whose exercise takes them into a public space would have needed to take a deep breath and speak firmly to themselves before putting on their running or cycling shoes again.

And that’s sad, because research shows that exercise that happens outdoors has some special benefits:
• It feels less strenuous – you’re more focused on where you are and what’s around you, from the ground beneath your feet to the sky above, so you don’t notice that you’re tiring.
• Wind (or water) resistance and uneven terrain can make an exercise session more demanding and push your body more, but grass and sand reduce the risk of injury.
• It reduces stress – heart rates, blood pressure, levels of the stress hormone cortisol and other health markers improve when people are exposed to greenery and fresh air, even in a city park. Yes, even exercising in less-than-fresh city air is good for you!
• Those who exercise outdoors are more likely to stick to their exercise and benefit long-term.

Terry Oakley-Smith’s powerful story is the perfect illustration of why this year, the theme of National Physiotherapy BackWeek (4-8 September 2017) is: Free to be active – take back our streets.

“As physiotherapists, we know that exercise is the essential prescription for something like 90% of our ills – it will have a beneficial impact on anything from arthritis to cancer to depression to heart disease and more,” says Dr Ina Diener, president of the South African Society of Physiotherapy (SASP). “But for many people in South Africa today, the most affordable and accessible forms of exercise, like walking and running or getting up an informal game of soccer in a public open space, are touched with a small sense of fear, because of the dangers we run on roads or parks.”

Just a few months ago, one of South Africa’s running legends, Bruce Fordyce, was mugged while running, and his shoes were taken. Hikers and cyclists are often mugged on Table Mountain. Commuters walking to taxi ranks and train stations are also at risk.

“We call on all South Africans to come together and campaign for safer streets and public open spaces, for our health and the health of our children,” says Dr Diener. “We ask our Minister of Police, Fikile Mbalula, and all commanding officers of the South African Police Service, to make a firm public commitment to guarding open spaces and routes people use for walking, running and cycling, not just during famous events like Comrades or the 94.7, but every day. No South African should ever experience what Terry Oakley-Smith did, just because they wanted to take a walk. Let’s take back our streets and parks!”